Finally!  I got to go to New York City!  We did so much that I have decided to share our experience and recommendations in several articles instead of one long overwhelming post. Today I include that, and a very unexpected surprise, that we experienced with a big celebrity!  Today, let’s talk Broadway. 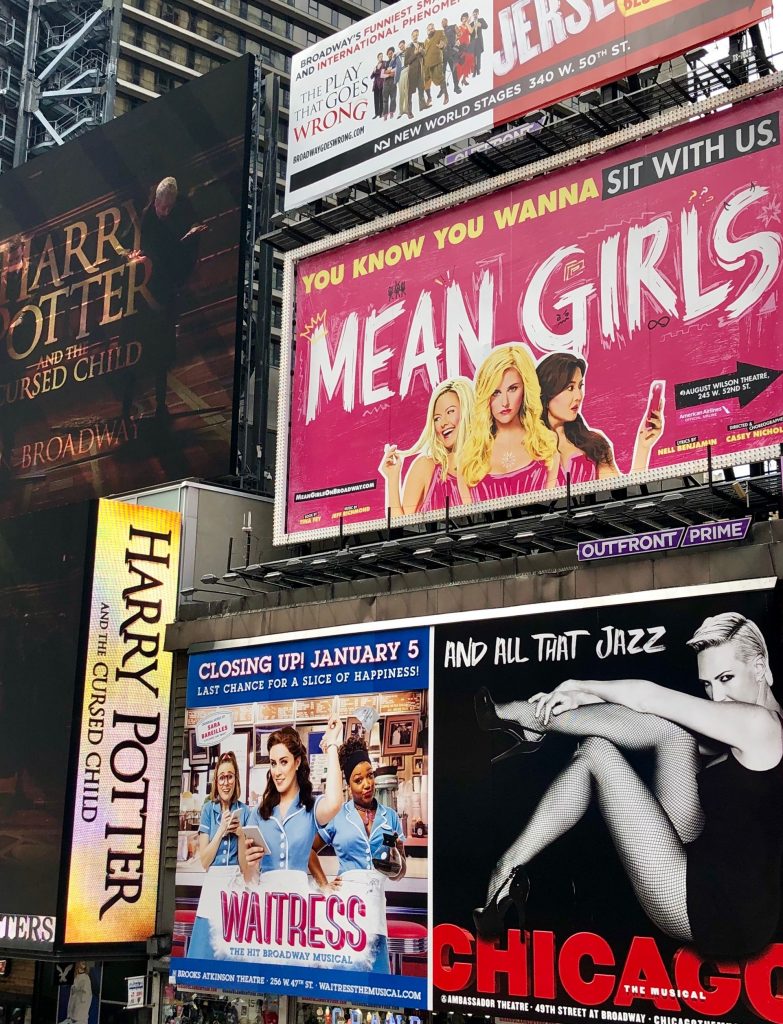 Tomorrow’s post will be all about the NYC food and where we stayed.  Later in the week I will take you on our own HBO Sex & The City Show Tour as we skipped the tour bus and did it our own way.  Plus, our 9/11 Memorial Tour & Museum that left our hearts hurting and healing.  I will cap off the week with a fun giveaway drawing with a NYC cool gift prize that I brought back from our travels.  Read on for our recap of our short but big visit to New York City starting with how we did Broadway.  We did it a little differently than most.

Boy did we ever get a cool surprise!  We got up close and personal with one of my daughter’s favorite Oscar-nominated actors!  Here is a hint… 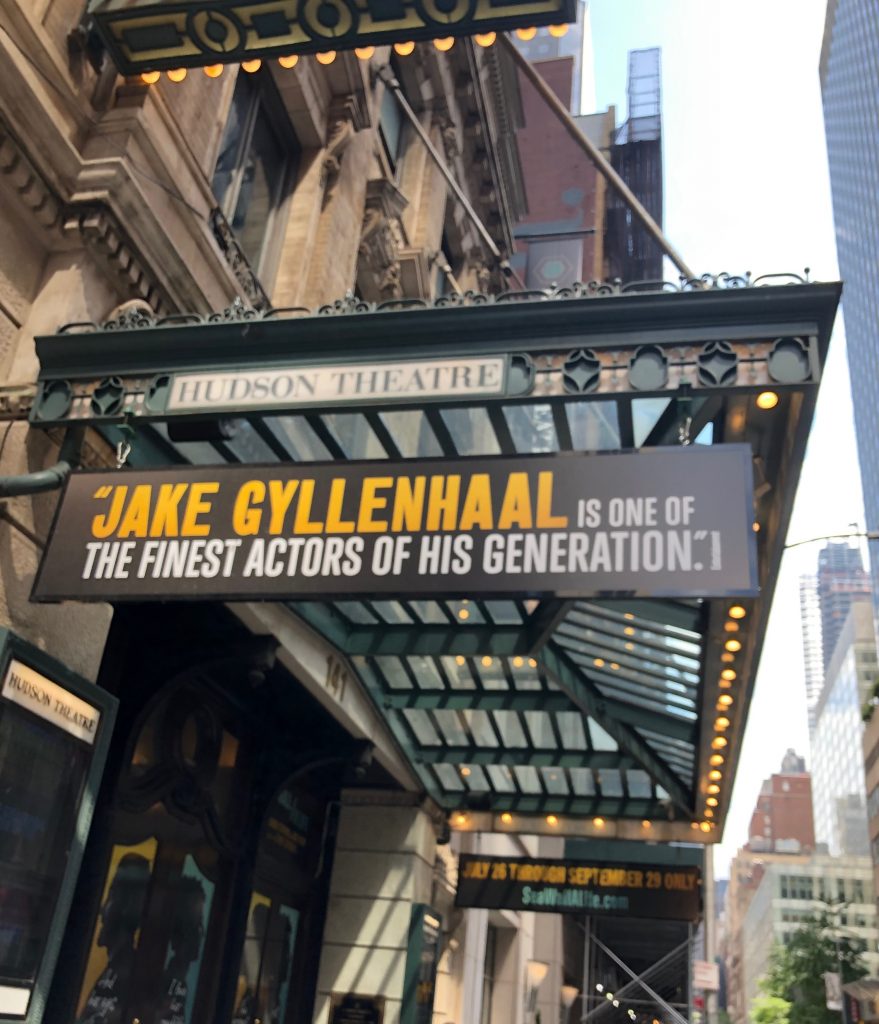 More on those fabulous few moments in a bit.

First a little background on why we decided at the last minute to fly 2,000 miles to finally see NYC.

It took me 52 years to check this one off my bucket list and I plan to go back.  This trip was also my daughter’s first time to see the big city thanks to her daddy.  He surprised us with a last-minute plan to join him in the city that never sleeps over Labor Day weekend.  He had to be there for a business trip and since we didn’t take a vacation over the summer for budget reasons, we decided to go ahead and take this trip.  And to make it now.  Soon our daughter will leave us for college.  Sometimes you just have to take that trip! 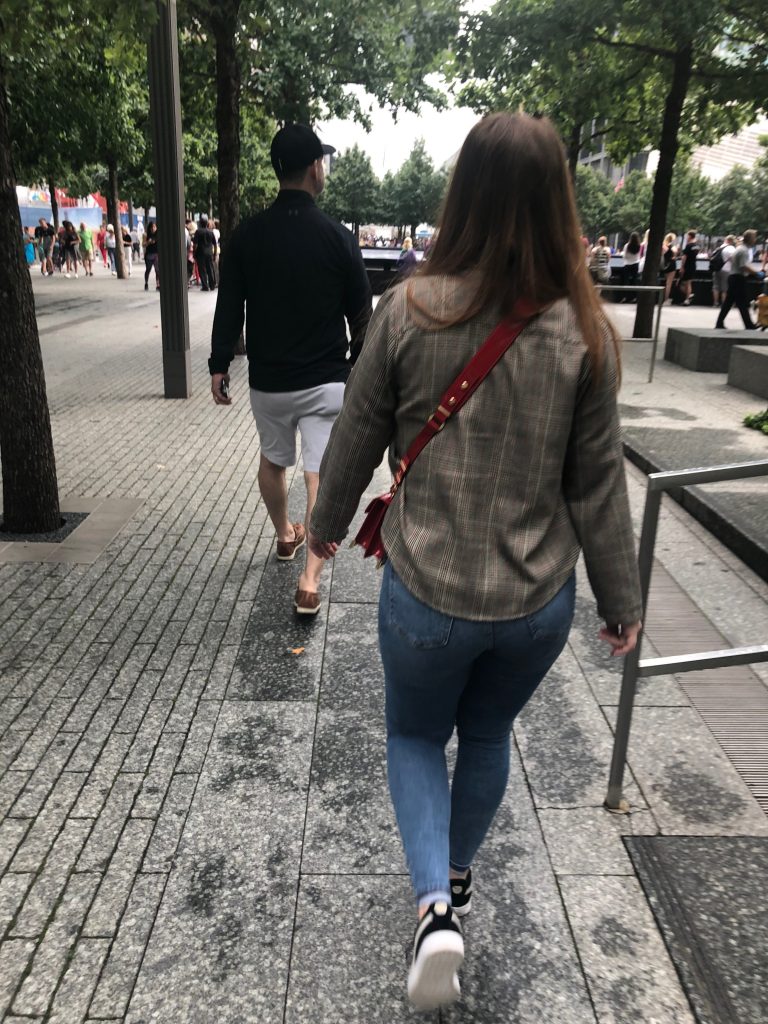 One of my favorite things to do was to photograph my girl and her pops walking through the city of New York.

It was very cool for reasons you would expect, but it was also special because it was the first trip that we took with just our daughter.  Our son is all grown up and has moved to LA.  Since our girl will follow his lead next summer and probably head out of state for college, we decided to fly to the Big Apple.  Our girl has performed in numerous community theatre productions around our city since she was six years old, so it was very special to take her to the big city that is home to Broadway. 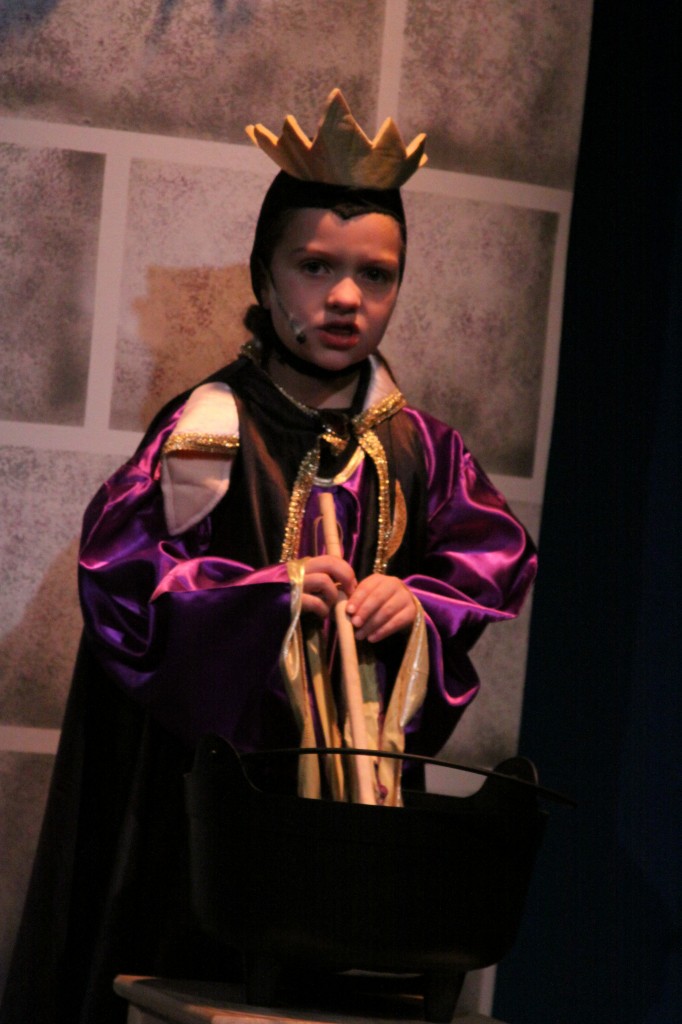 Our little Lexi as the Evil Queen in Snow White at Ahwatukee Youth Theatre so many years ago. 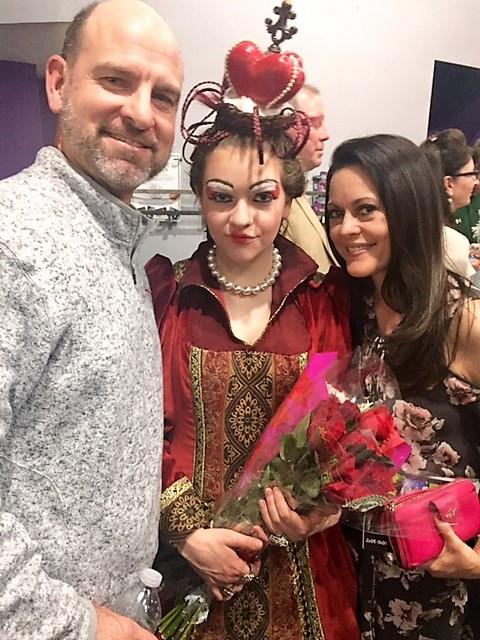 Ten years later as the Queen of Hearts in Alice in Wonderland at Valley Youth Theatre in Phoenix.

We took a few hockey trips with our son through the years.  This was the first time to take just our girl with us.  I highly recommend taking each kid on one solo trip at some point if you can swing it.  I also recommend taking a trip to see NYC.  We did a cool thing and let our almost 18-year-old girl do the trip planning.  She came up with some great ideas like seeing a series of Broadway shows to observe several very different types of productions.

Organized by our girl, her theatre tour for us included:  a large production with all the bells & whistles; another well-known show that is the longest running American musical in Broadway history, and a surprise performance that featured a big screen star!  Read on to see the very unexpected and uber cool surprise we got.  I recommend going to New York with a plan…but leave a little room to perhaps see unplanned performances, too.  Keep reading…so excited to share!  Our girl’s plan was genius!

We enjoyed three very different theatre experiences.  First on my Lexi’s list was Wicked and it was wickedly good, as you would expect!

This photo is from the Gershwin Theatre website. We highly recommend taking in a show at this beautiful 4-story theatre. 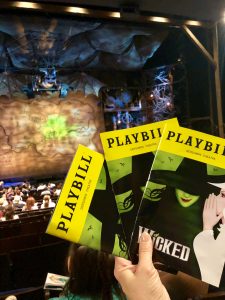 My girl and I had seen Wicked when the traveling Broadway show came through our town, but we just had to see it in NYC! It is one of our favorite shows.  She actually played the Wicked Witch in The Wizard of Oz a few years ago in a big Valley Youth Theatre production in downtown Phoenix. Wicked is such a cool production since it tells the supposed back story of how the witch got to be so wicked…or is she really truly wicked?! I won’t give it away!  You must see the show to find out for yourself. See it in NYC if you get the chance. 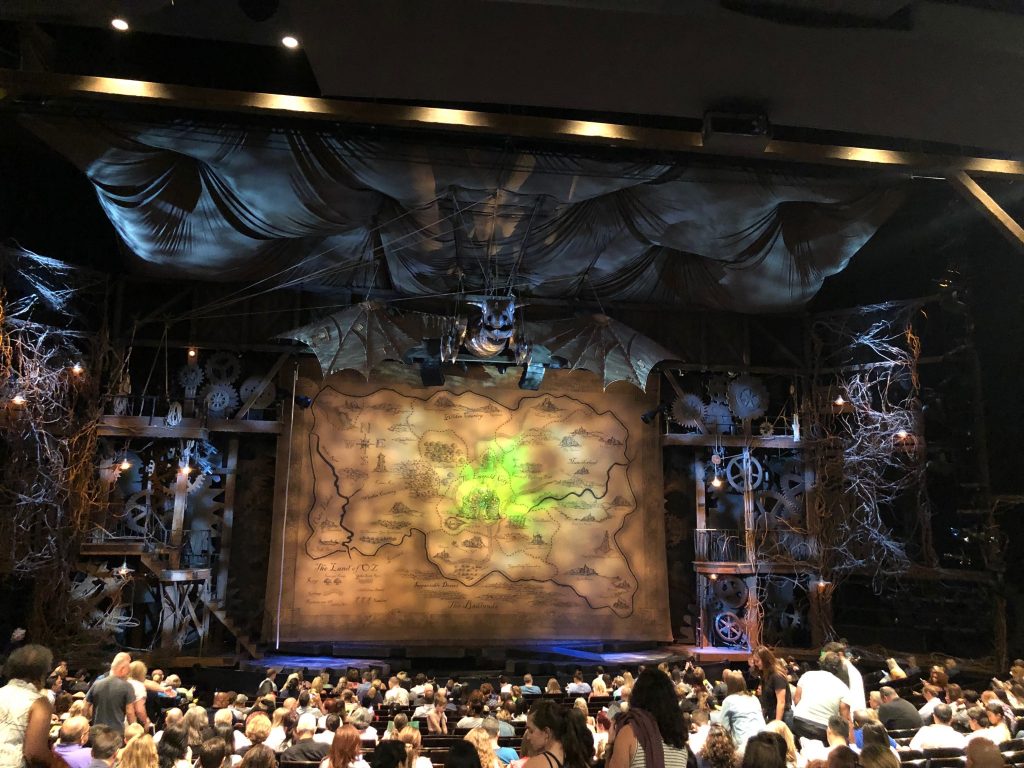 Look at that grand stage! Seeing Wicked first was so cool to show my hubs since he had never been to a Broadway show even though he goes to NYC a lot for business. Wicked currently plays at the beautiful Gershwin Theatre on Broadway.  More information and tickets here. 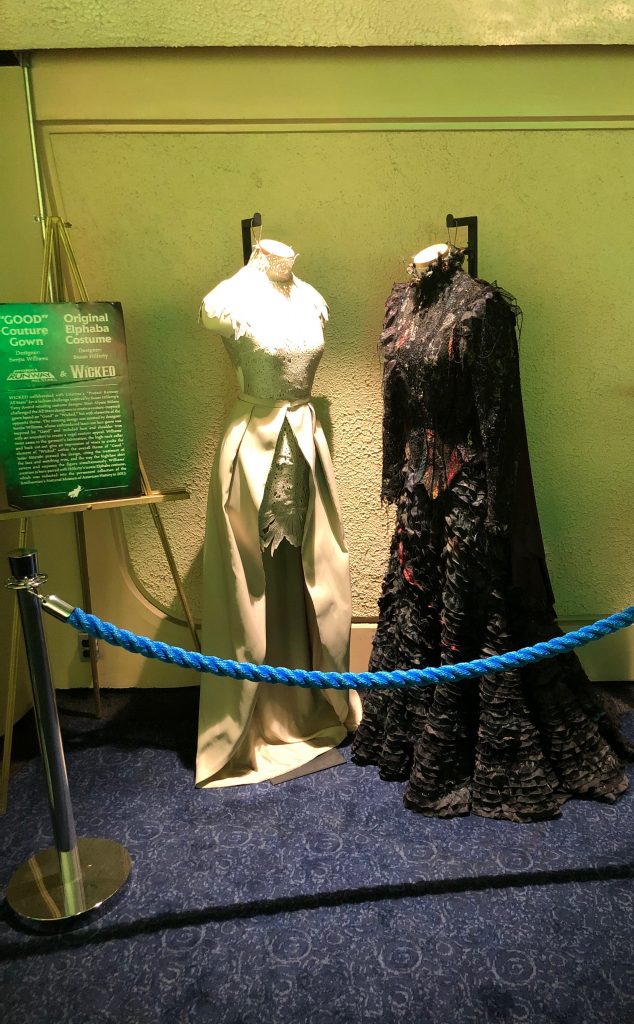 Pictured above is one of the exhibits in the beautiful Gershwin Theatre.  The theatre also houses four floors, concessions and several bars featuring show themed cocktails. A fun theatre to take in Wicked for sure!

It sure was fun to take hubs to these shows as his only theatre experience through the years has been watching our daughter perform in a variety of productions.  That experience has certainly made him more interested.  The next show our girl chose to see with us was very different from Wicked.  We headed to the historic Ambassador Theatre to catch Chicago The Musical. 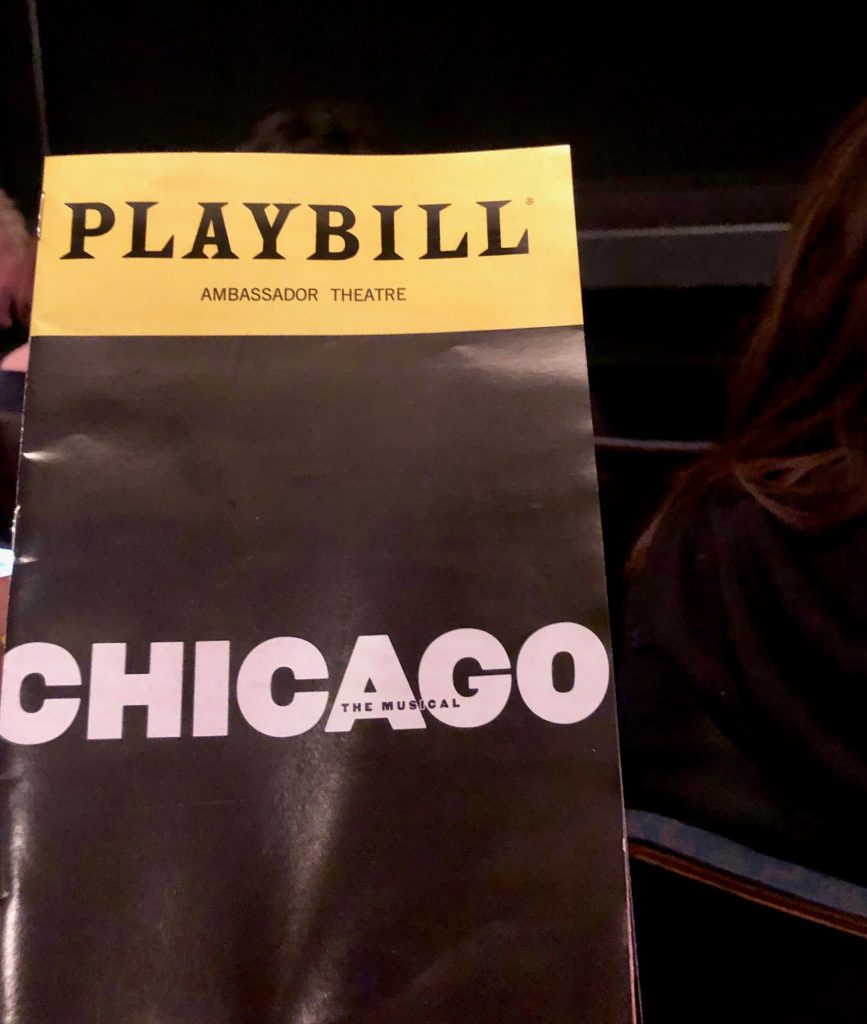 Chicago is so different from Wicked. It is a popular show but isn’t a large-scale stage production like Wicked.  We had second row seats to this one so we could really appreciate the hard work each triple-threat performer projects with every move on stage.  Chicago, winner of six Tony Awards, is a raw and authentic display of incredible talent both by the leads and by the very active and high-profile ensemble as well.  Very few props are used along with minimal costume and set changes, so seeing this one after seeing Wicked was a cool contrast to experience.  The fantastic live orchestra is also featured on stage and interacts with the characters, which is unique and fun to watch from the audience.  I’m unable to include pictures of the show or inside this theatre because I can’t find any photo online with permission to share.  Check out this website that shows beautiful photographs of the pretty theatre along with an interesting story about the history of the Ambassador Theatre.  I recommend Chicago, but only for older teens and adults as this show is all about adult themes.   Get showtimes and tickets here.

On an evening stroll our second night in the city we observed these cool signs that had our daughter jump up and down with excitement! 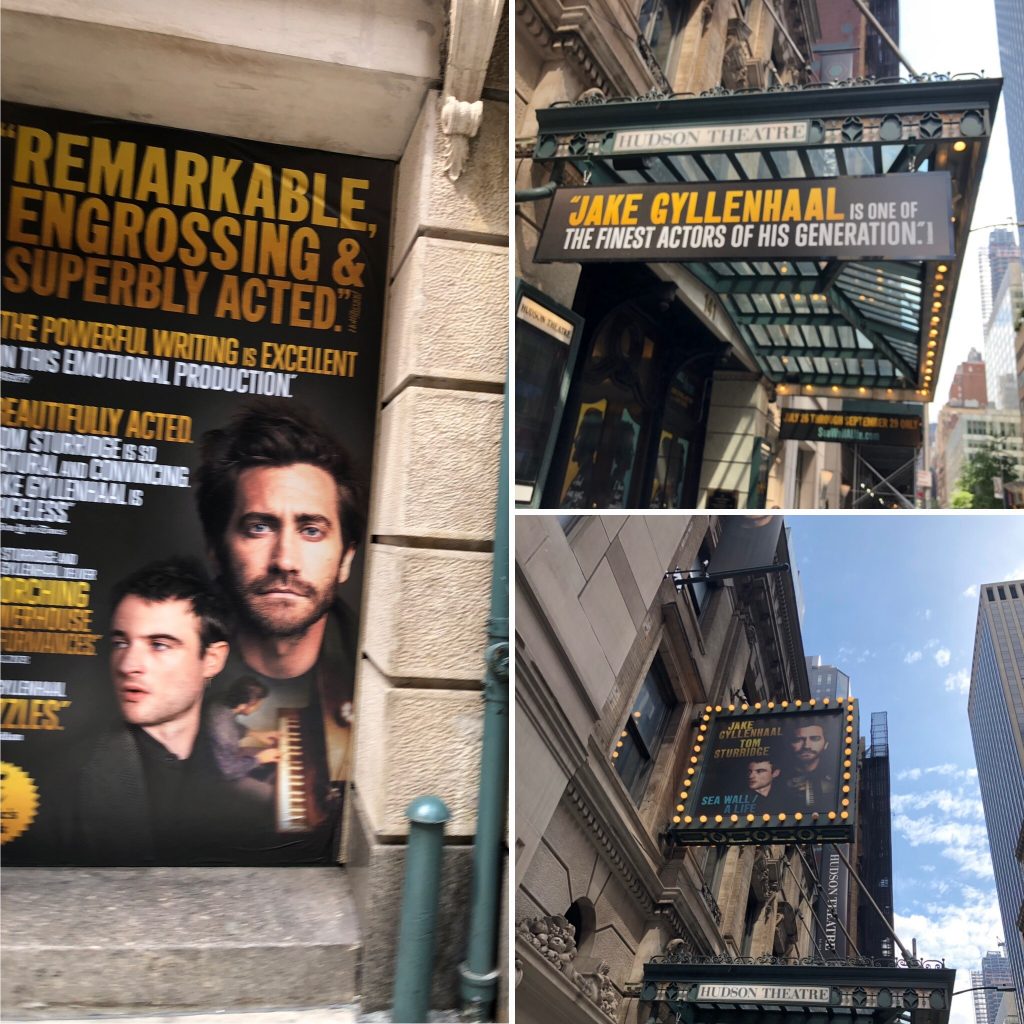 This show was just a few doors down from our hotel and it starred…Jake Gyllenhaal!  He is a big star and one of my girl’s faves.  To discover that he was taking a break from the big screen to do this two-man Broadway show right by our hotel was too much to resist!  His costar is also well-known actor, Tom Sturridge.

Playing at the cool Hudson Theatre (the first home for The Tonight Show from 1954 through 1959), this beautiful venue was spacious, yet feels intimate. 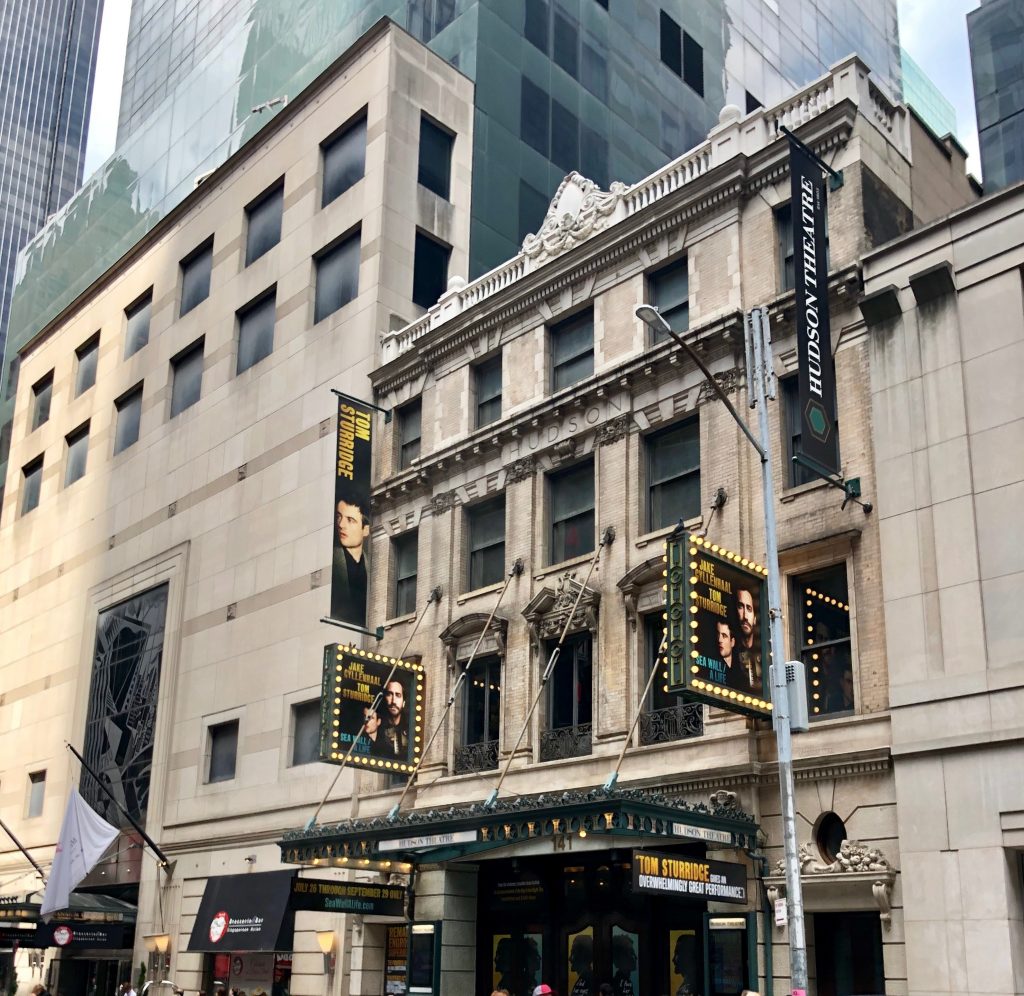 We had second row tickets.  I have no photos of the inside as the theatre ushers were quite strict about having phones turned completely off and put away.

The show was very touching.  A bare bone deep, but entertaining, 2-act performance about milestone life events that shape the human experience.  The two actors did storytelling monologues about the joys and heartbreaks of new life and life’s losses.  Mr. Gyllenhaal was so good, in fact, that halfway through his act, I forgot it was him, the big star, doing this character.  He became the character and my heart and mind traveled to the depths of his story.  The show, both him and his costar, were so good!

To our HUGE surprise, at one point in the show, Jake Gyllenhaal took his act to the audience and he stood right next to me performing his character!  I was seated in an aisle seat and…oh my goodness…I so wanted to snap a picture!  But I would have been thrown out, I’m sure.  Plus, it would have been quite rude since he was completely in character.  Then he incorporated our entire row into his act.  He looked at my daughter and me and said, “excuse me”.  Then he proceeded to run right down our row in front of each one of us who sat entranced watching him pass us by.  We had to move our feet out of the way to let him by and it was very cool!  This was, literally, our brush with fame!  I know that my daughter enjoyed watching one of her favorite actors do his craft and perform in character right in front of where we sat!  This unique and touching show runs through September 29th.  Get tickets and showtimes here.

One fun note. I found a very entertaining interview that Jake Gyllenhaal did recently with Ellen on her show.   He describes his play that we just saw live, Sea Wall/A Life.  He also includes the sweetest story about his own mother!  Made me smile and even tear up a little.  Now I like him even more as a huge talent!

Our Broadway experience was enhanced by seeing three very different shows in three stunning historic venues.  We chose to spend our money on Broadway tickets and food over shopping.  It was worth it!  I recommend seeing different types of Broadway shows when you visit New York.  You can do it!  After all you will be in the city that never sleeps.  Sleep when you get back home.

Tomorrow I will share where we dined and where we stayed in New York City.  It was all good, so stay tuned for that post.