You are here: Home / Food / Desserts / Rachel Recommends – Give This Recipe A Try For Twist On Traditional Pumpkin Pie

It’s not pumpkin pie.  Something a little sweeter, and better, in my festive holiday opinion!  With tasty ingredients like pumpkin, whipped cream, cream cheese, vanilla pudding, cinnamon and more, this one is a crowd pleaser! Thanks to my sweet sister-in-law, Stephanie Harris, this yum yum has become my longtime favorite pleasing pumpkin decadent dessert.  I share this every year.  It’s called Pumpkin Supreme and it’s a family favorite in Stephanie’s Texas family as this sweet treat has been handed down through her family’s generations.  I love that she lets me share it every year.

Different from pumpkin pie with a sweeter and more decadent twist, this stuff is delish!  I have shown the recipe several times through the years in my Your Life Arizona morning show segments. 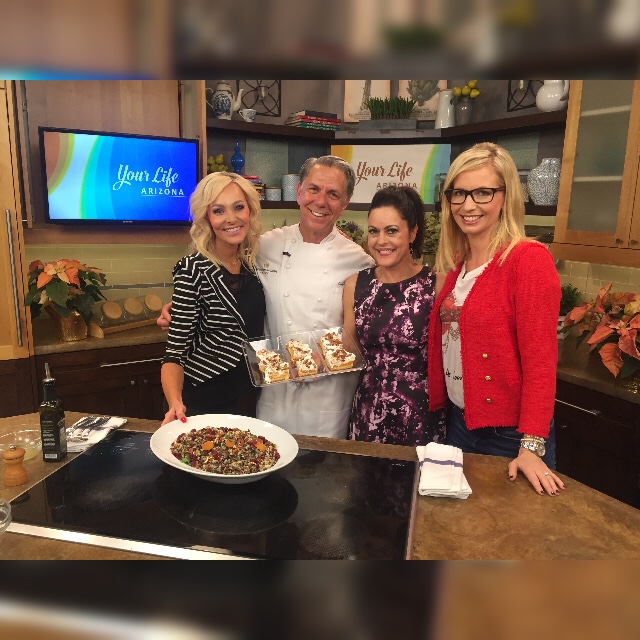 Showing off my finished pumpkin supreme recipe on our set as we closed the yummy show that day!

Shamrock Farms once hired me to make recipes in my own kitchen.  With both media events, this recipe was the star of the show! Give this recipe a try for a twist on traditional pumpkin pie.   If you want to whip one up for your holiday gathering, here is the recipe.  Enjoy!

Instructions:
1. Mix graham cracker crumbs and 1 cup of the sugar in with the butter.
2. Press this mixture into a 9 x 12 Pyrex dish, so that this becomes the crust.
3. Combine eggs with the 3/4 cup of sugar and cream cheese.
4. Mix until fluffy.
5. Spread over crust.
6. Bake at 350 degrees for 20 minutes.
7. When completely cool (can even refrigerate overnight), go on to next step.
8. Mix 3/4 cup milk with two boxes of instant vanilla pudding.
9. Add pumpkin. 12. Cover with remaining Cool Whip and sprinkle nuts on top.  Here is what a slice looks like and you won’t believe how good it tastes.  Place a dollop of whipped cream on top, like pictured, or layer the entire top with whipped cream, sprinkled cinnamon and pecans.  Up to you. Truly decadent!  You can also serve this dessert in mason jars by following the same steps and layering in the jars instead of a pan.  This recipe is super tasty.  Try it!